Loser Open was a FAI-2 competition which took place in the first week of June as was very successful with the tasks and weather conditions. We flew 4 out of 4 days having 120, 180, 115 and 75 km tasks. I was flying with Avionicus livetracking application which I want to test more this summer as it is very easy to use for both — livetracking and back up logging.

Since this corner of Austria is not known quite well by most of for instance Russians who traditionally prefer to fly in Greifenburg when they go to Austria, I think it would be interesting to give some more detailed description of this flying place. The area is just great with scenery and variety of terrain!  My prior many thanks to Gerolf who took his efforts into taking most of the following pictures and gave me the opportunity to compose this extended post.

Loser ([ˈloːzə], not [ˈluːzə] ;)) is a mountain over Altausee in Salzkamergut area in the very northern-west corner of Styria, Austria. It is a part of Totes Gebirge (translates as Dead Mountain Range), quite noteworthy karstic plateau, ~14×20 km size, known by its complicated and quite impressive cave systems. The longest of them reaches 140 km length! Limestone, the main compound of rocks in this area, is subjected to wear by dissolving in water reach with CO2. So as the time passes by the inner part of the massif is being dissolved, which provides stretching the sinkholes, caves and dolines. Somehow flying over mountains which have some kind of interesting zest, story in them, makes it even more exciting for me.

On the other hand the area is well supplied with lakes, which makes it one of the most scenic places from what I have seen in Austria so far. Here is a panoramic shot which I found in the gallery of Panoramio user called artistidilegno. This is the view from pretty much the main take off:

Here is another one just to give the idea of the views: 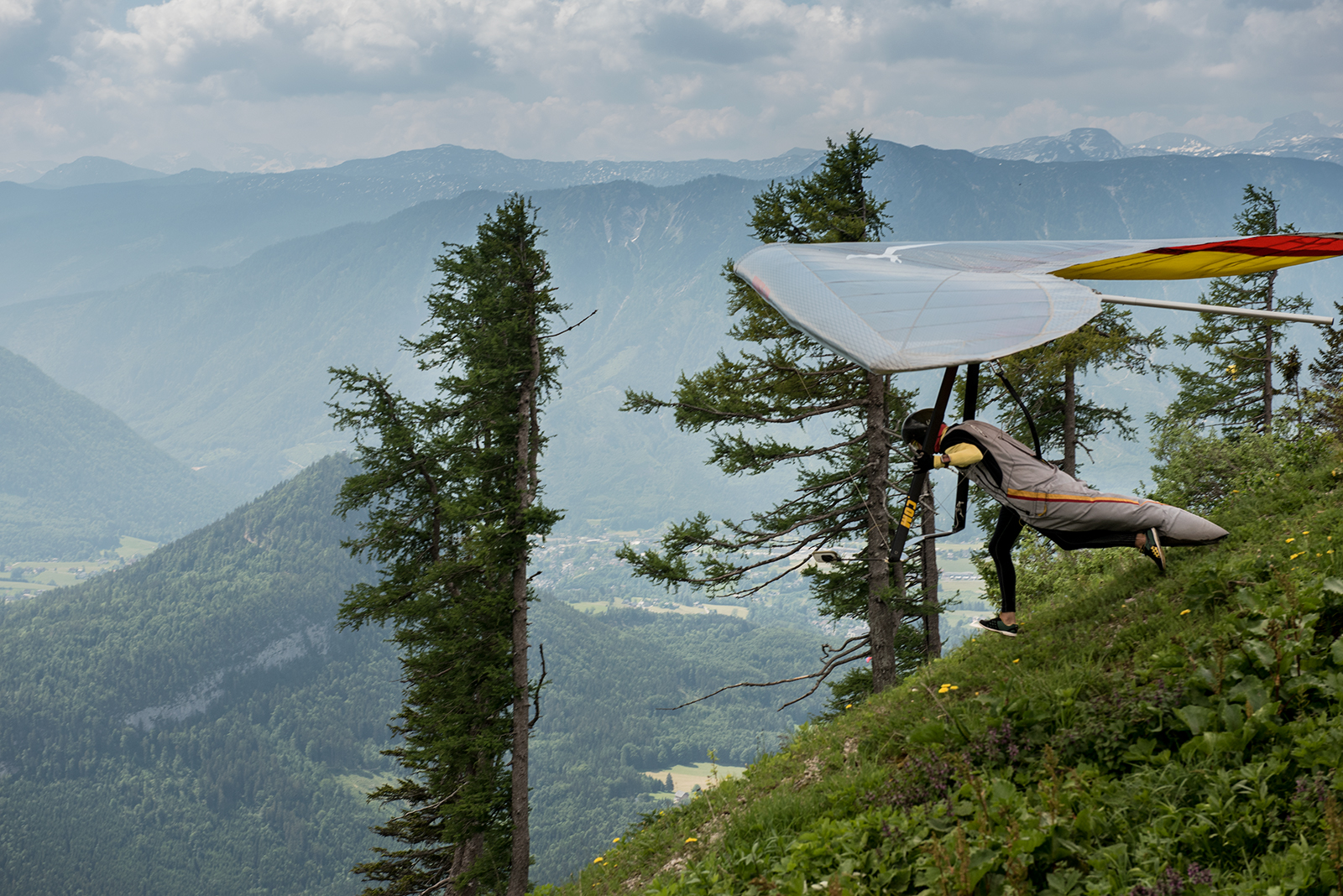 Classical for this take off is an issue with a big cloud forming over the mountain, sheltering the sun and chasing the slight south wind away. Here I probably have to give a little remark concerning the main pattern of the winds in the area.

The main idea is that as the day goes on the Alpine Foreland in North accompanied by higher massive mountains in South form noticeable system of local North winds, which entering the valleys openings wave all the way down to Enns valley, where they meet usually strong from east to west flow.

So it means if we want to take off to the south we need a local-scale south flow from a sun-lighted slope. In that case the covered sky doesn’t help causing a queue of pilots. Here are Gerolf’s shots giving the overview: 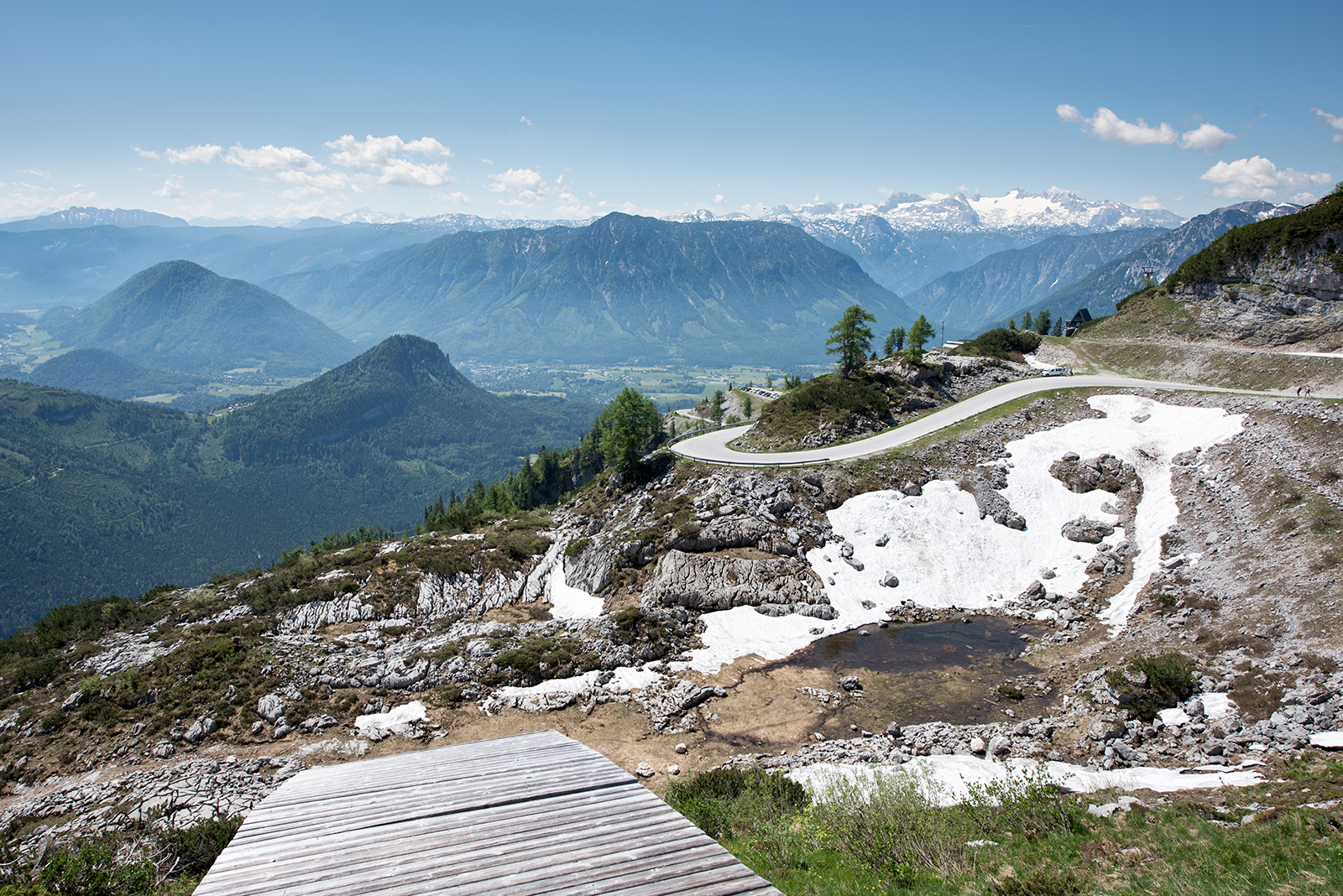 Once in the air it is usually a bit bumpy in the beginning but not a big problem to climb up.

Overall situation with this northern wind tendency brings a certain specificity into flying here. A common mistake is to jump low in a sunny but unfortunately lee side of a ridge. Or another good example with Grimming — a high beautiful limestone rocky peak which stands on the corner of two winds — eastern flow along Enns valley and NW coming from Bad Mittendorf: 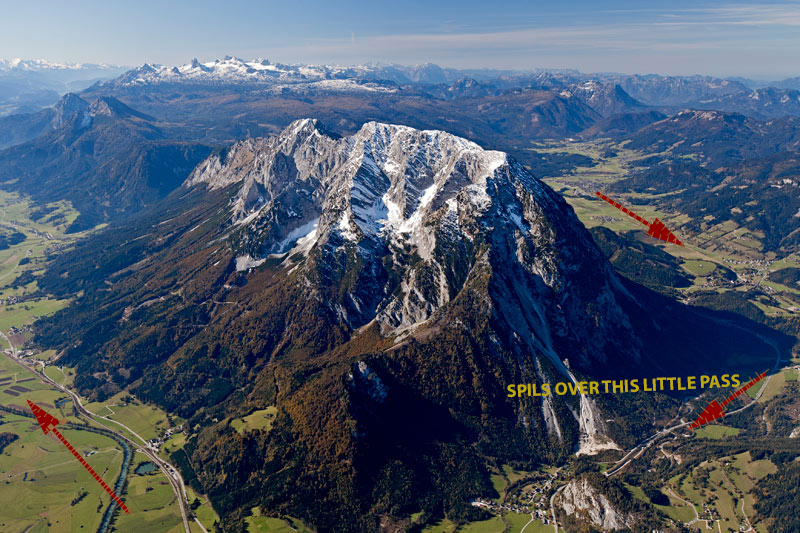 This effect causes the situation where the North side of the mountain actually works better and when one glides on a sunny promising slope it feels as a lee. I made this mistake which cost me a bit of time on the first day while we were on the way to Dachstein. Uhhh, this is a beautiful and very impressive view from the board and basically the picture of the 20 km final glide over the whole dead plateau towards Obersee and further on to Altaussee! We made two of those glides on the first 120 km (http://www.xcontest.org/world/en/flights/detail:Sasha/4.6.2015/10:09) and second 180 km triangular (http://www.xcontest.org/world/en/flights/detail:Sasha/5.6.2015/09:52) tasks.

Here is another teaser of Dachtein: 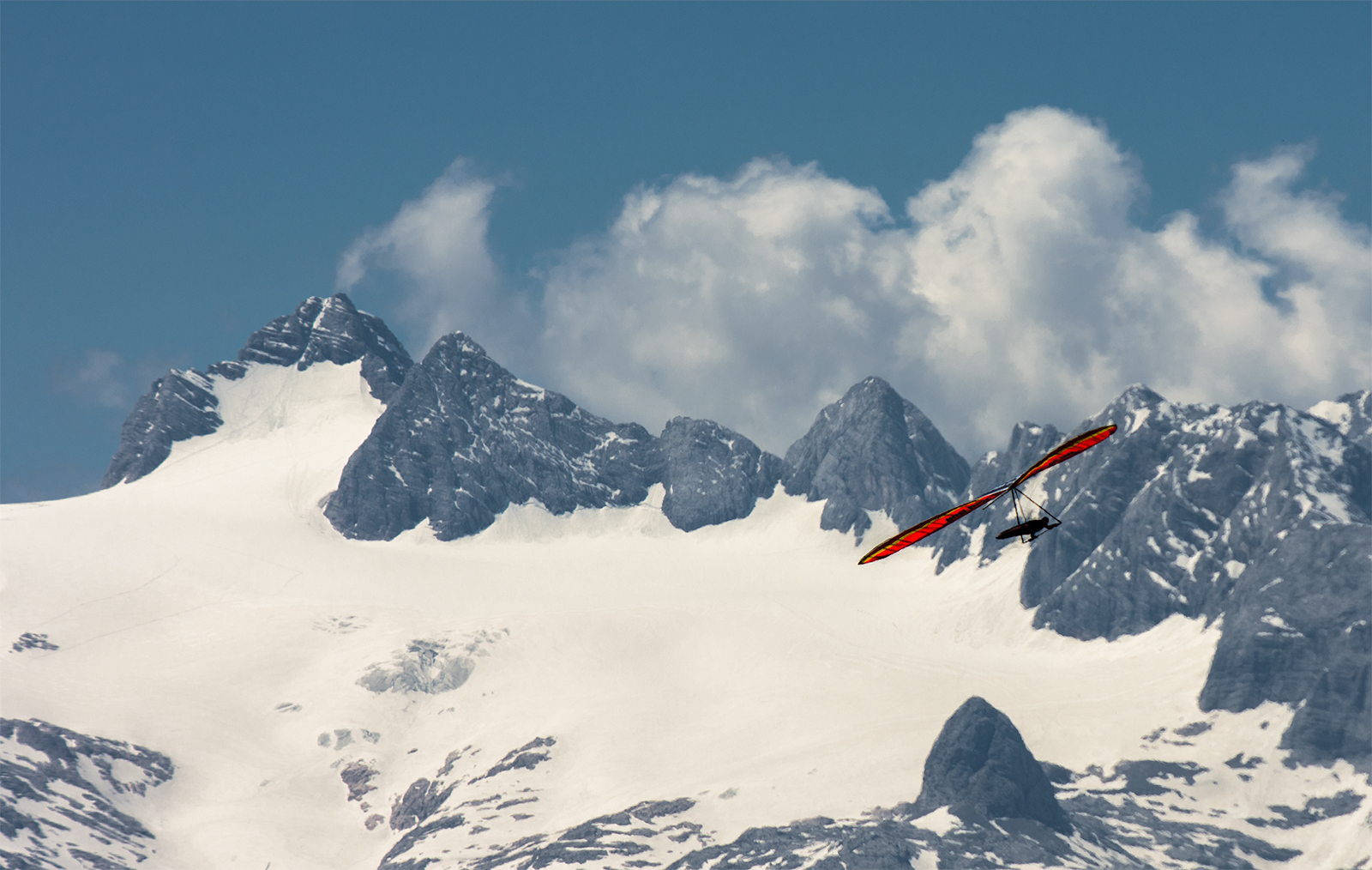 On the third day the north wind on the Loser take off got stronger so we moved to Feuerkogel, which is about 20 km to NW from Altausee, the mountain stands last in the range before Alpen Foreland to the north. A big lake called Traunsee lays to the east and another lake Attersee is to the west. The mountain itself is again a massive system of peaks sticking out of a limestone plateau. There is a cable car to the top which is convenient to use to get up with a hang glider. So I was again quite inspired to fly from the new place through the task line with a lot of lakes. 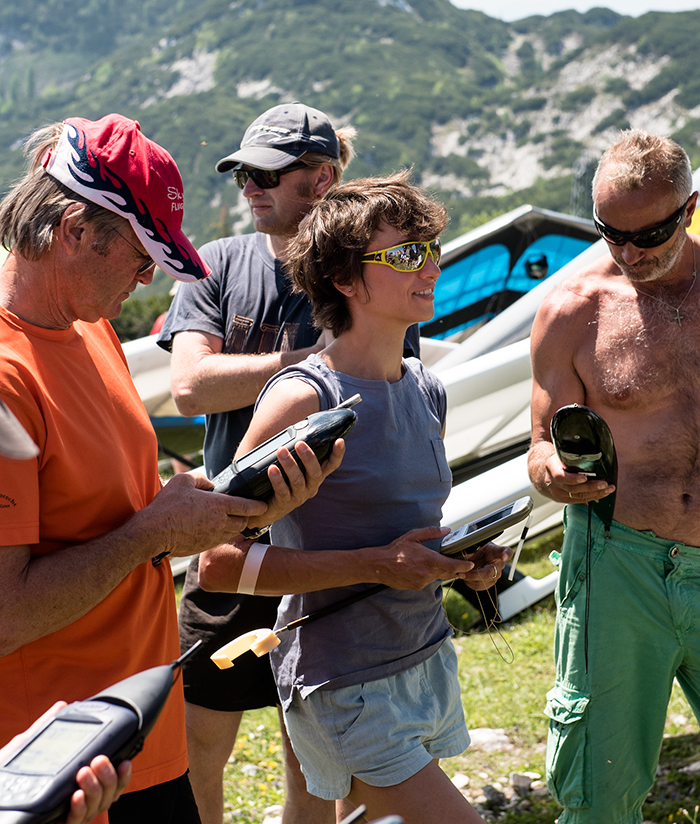 And at first I didn’t pay much attention to the take off conditions thinking mostly about the task. Then I saw this: 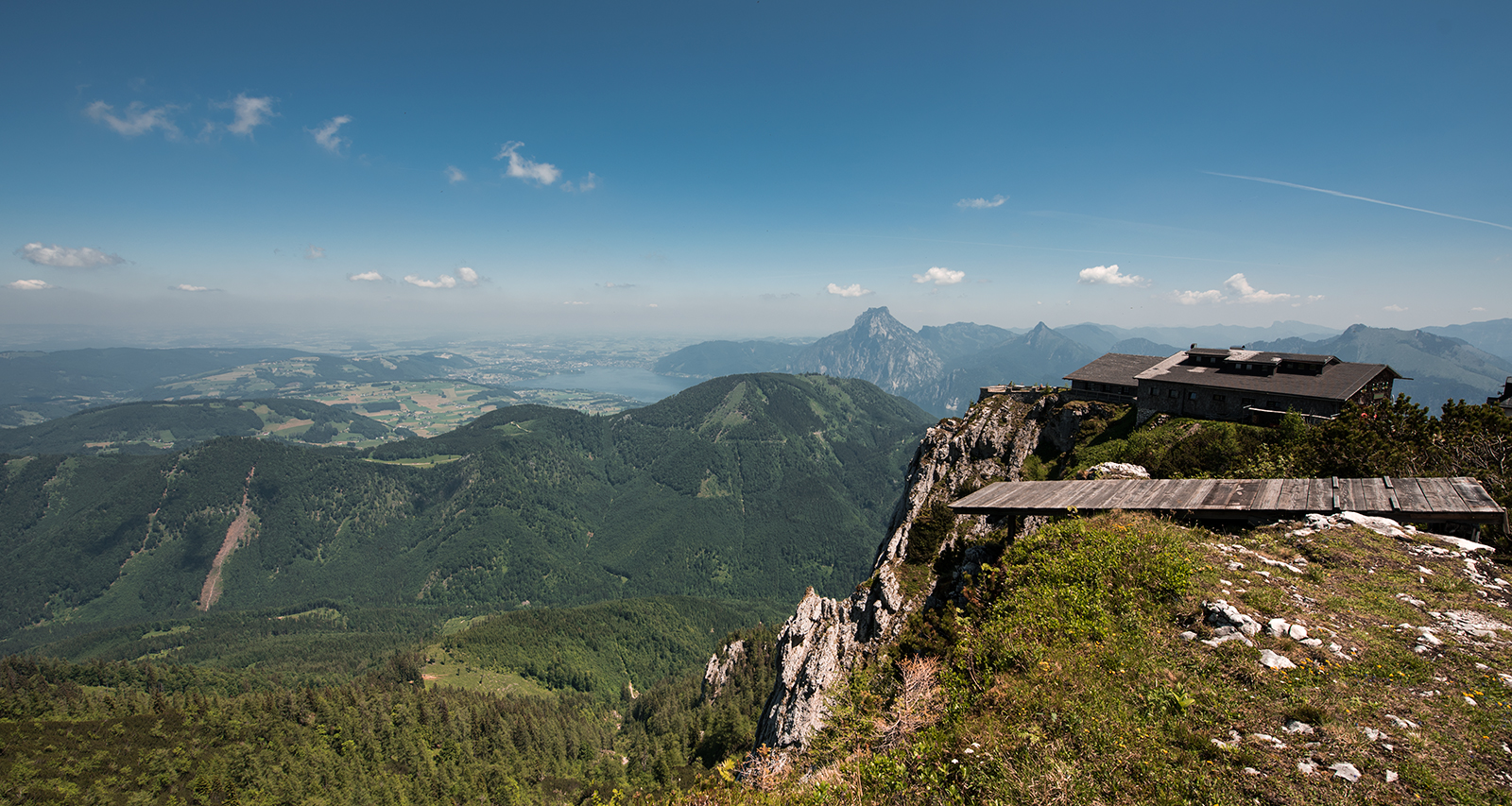 Seriously! This is the angle of it. Good thing is you got a lot of space to fall down in case you screw up the take off: 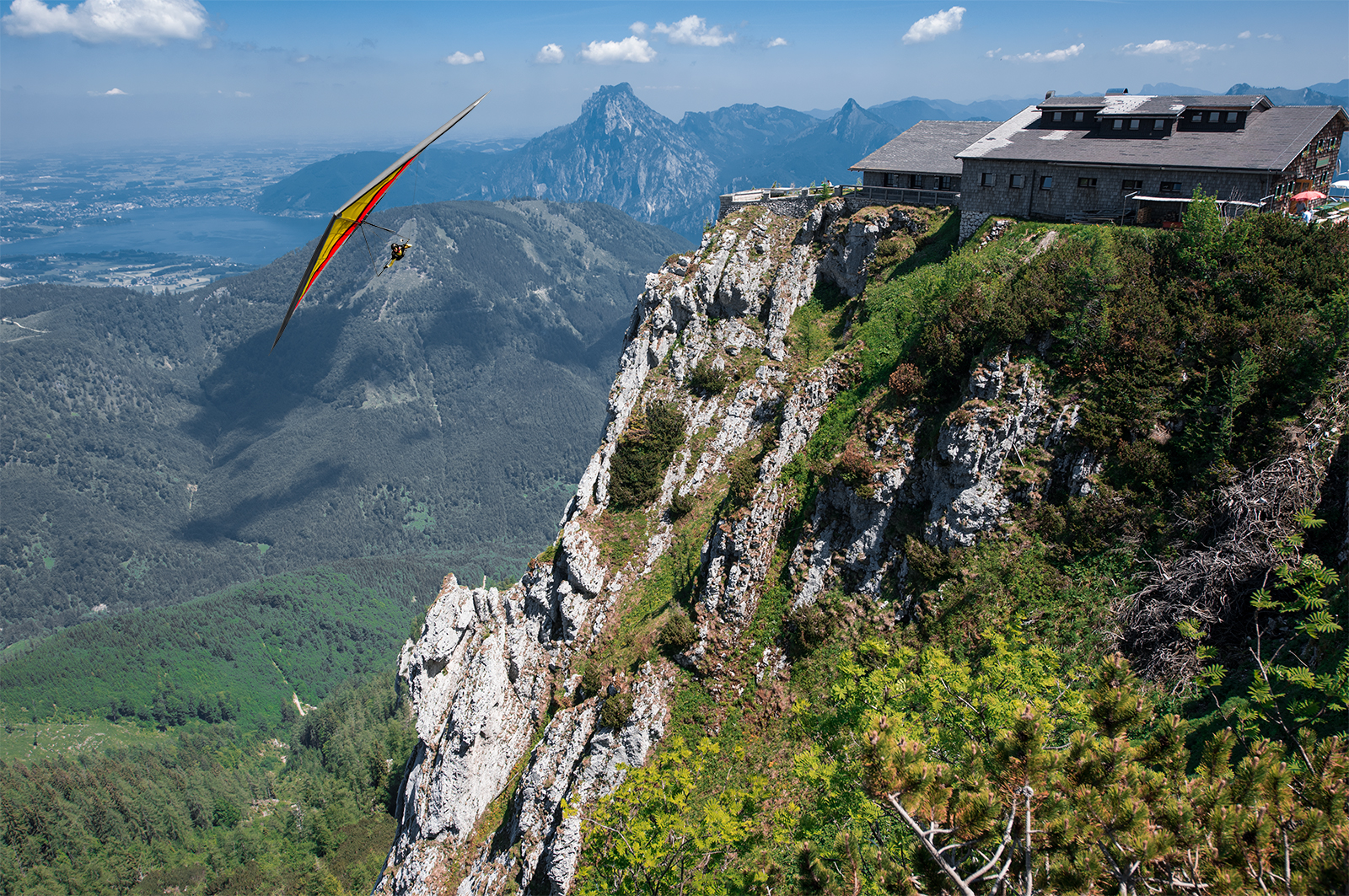 Well, not as scary as it looks like before you start to run. The launch was actually quite cool; here is Gerolf’s shot I took from his facebook timeline: 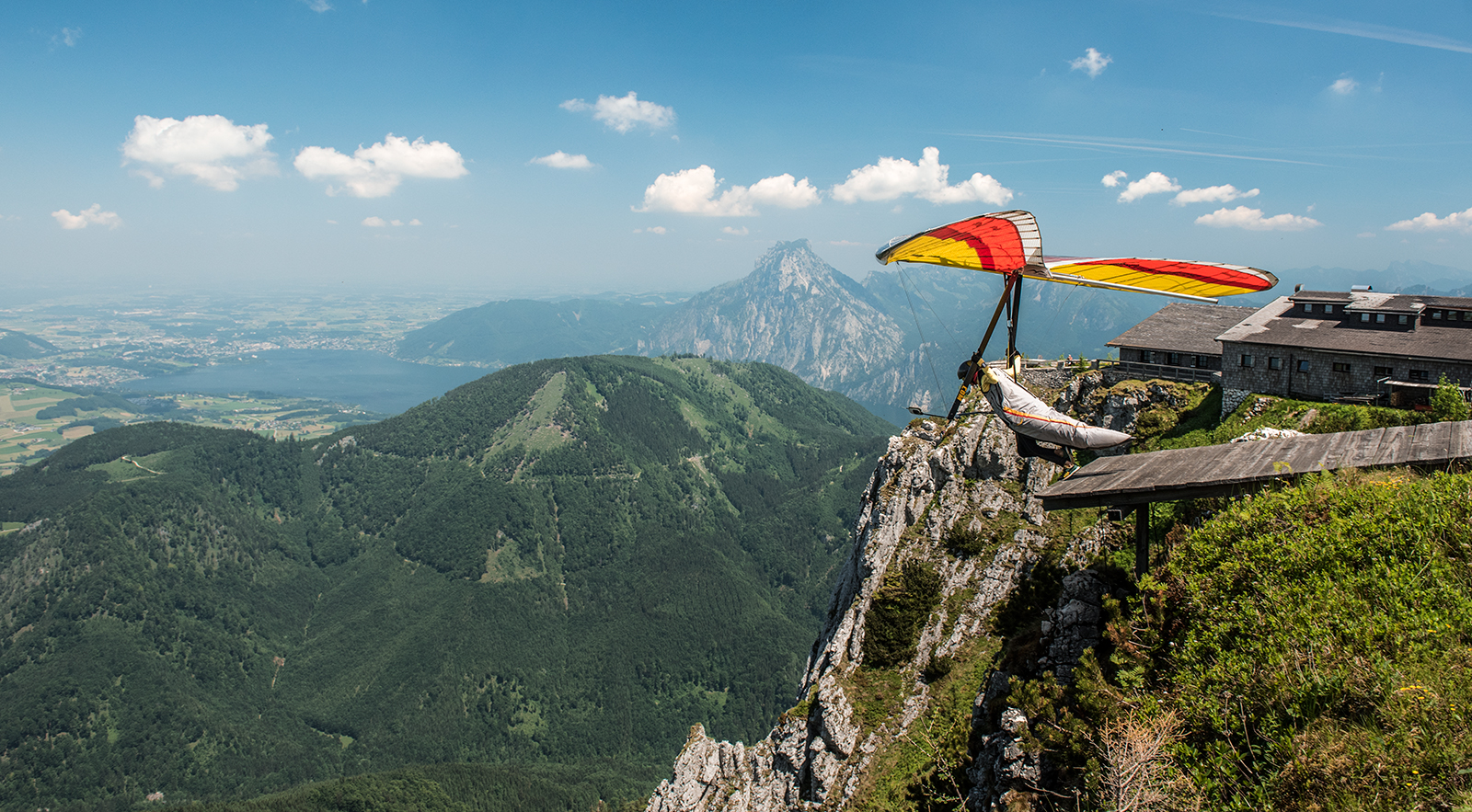 The “ramp” faces to the north but after taking off normally the good thermal is found around the corner on the SE side. That was the beginning of the 3rd 118 km task with goal in Altaussee. Most interesting part was flying from Feuerkogel to Loser as these 20 km are bad with landings and good with views:

And least successful part is illustrated by the next picture showing my not too good end of the flight. When I was already mistakenly contemplating the cold drink on the goal field, I blundered it all so perfectly that eventually ended up 7 km from the goal being trapped in Hinterberger Valley with North spilling over the chain I needed to jump over and strong NW in the valley itself. So even having all the sun and western slopes didn’t help me to get high enough to continue trough any of the openings. So in order not to be fooled by all this promising sun and south exposition it is better to stay high enough to make sure it will be possible to jump to the next good spot or to the next valley. Here is the link to the task on XContest: http://www.xcontest.org/world/en/flights/detail:Sasha/6.6.2015/11:06

Not that I was put down completely 🙂 Was happy to see Gerolf coming to pick me up. 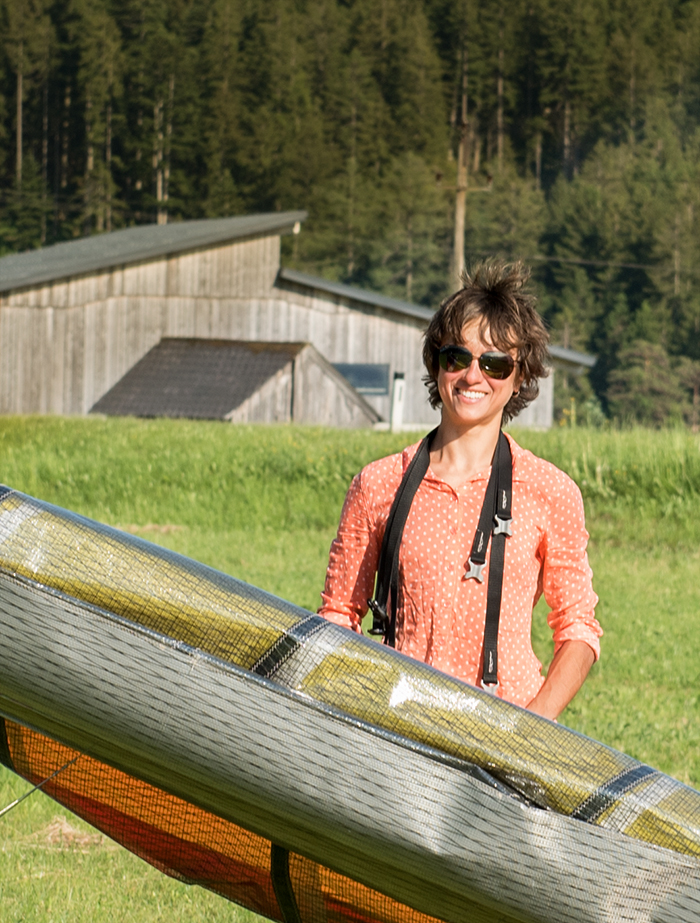 But! The last day was better in terms of my result. We had a short 78 km task, which I could fly faster than previous ones almost not making mistakes. Constantly changing wind on the landing was a bit tricky part in the end for most of people. But some were still looking stylish. 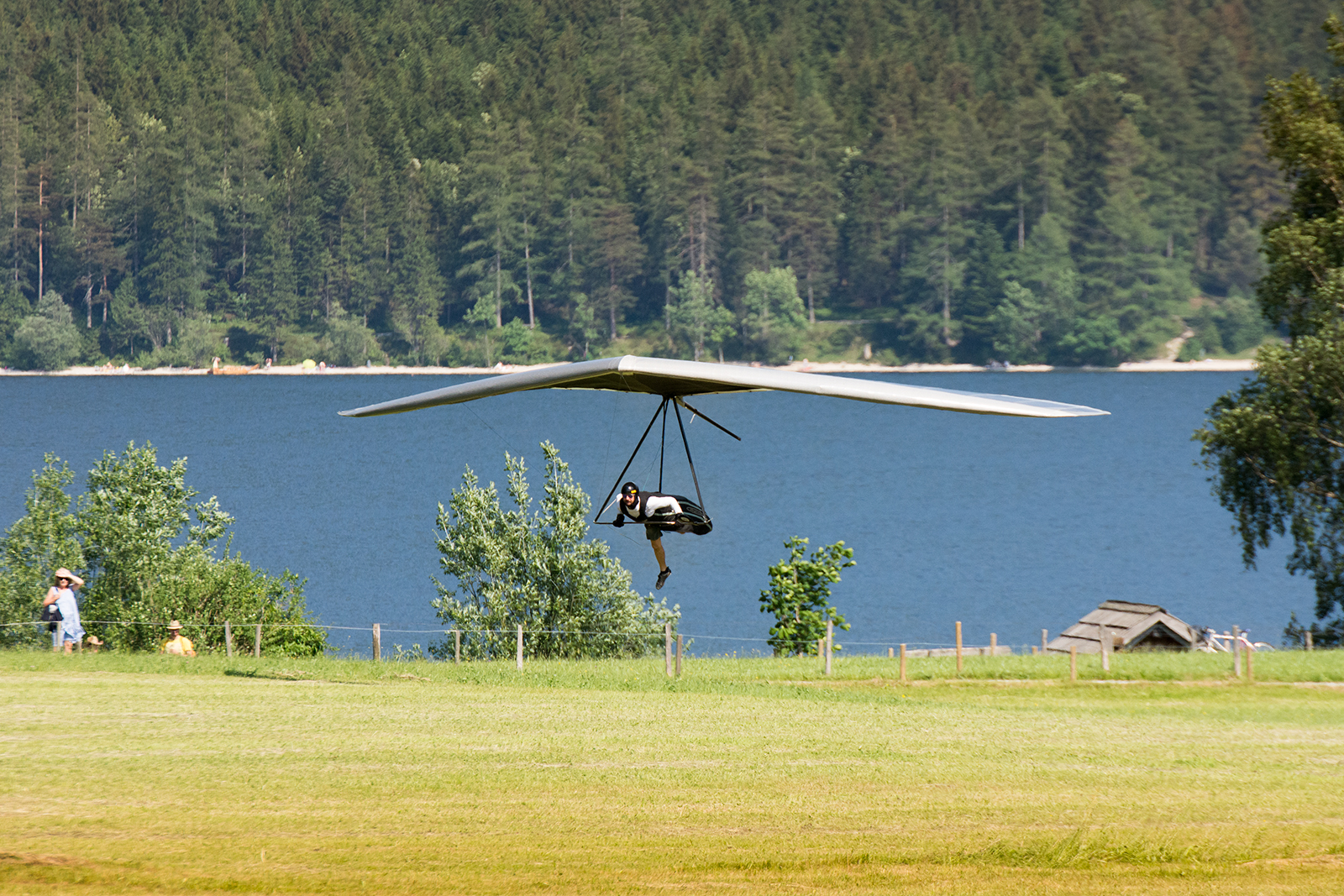 Here is the view when you come to the goal: 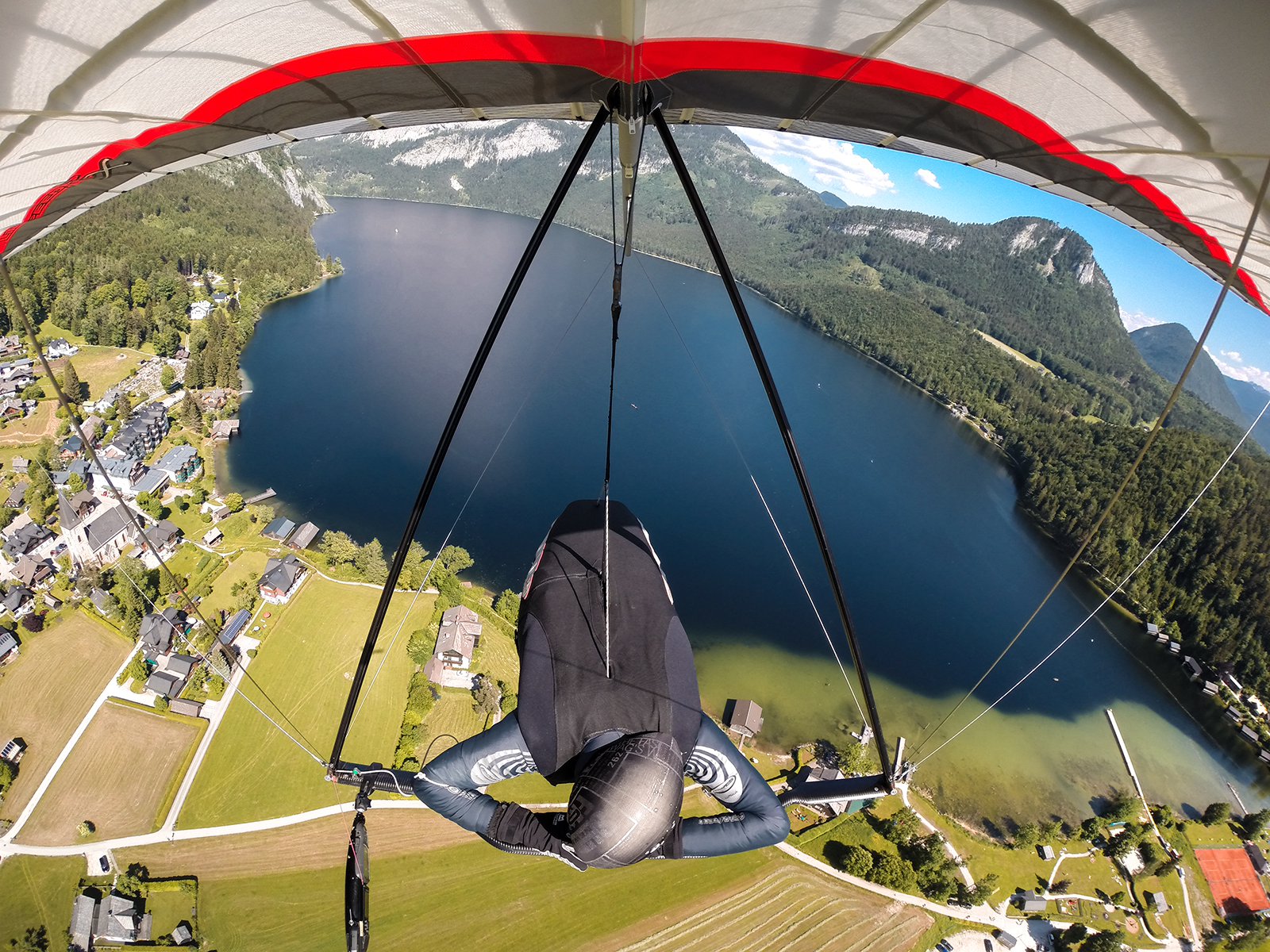 Gerd won the day and the competition: 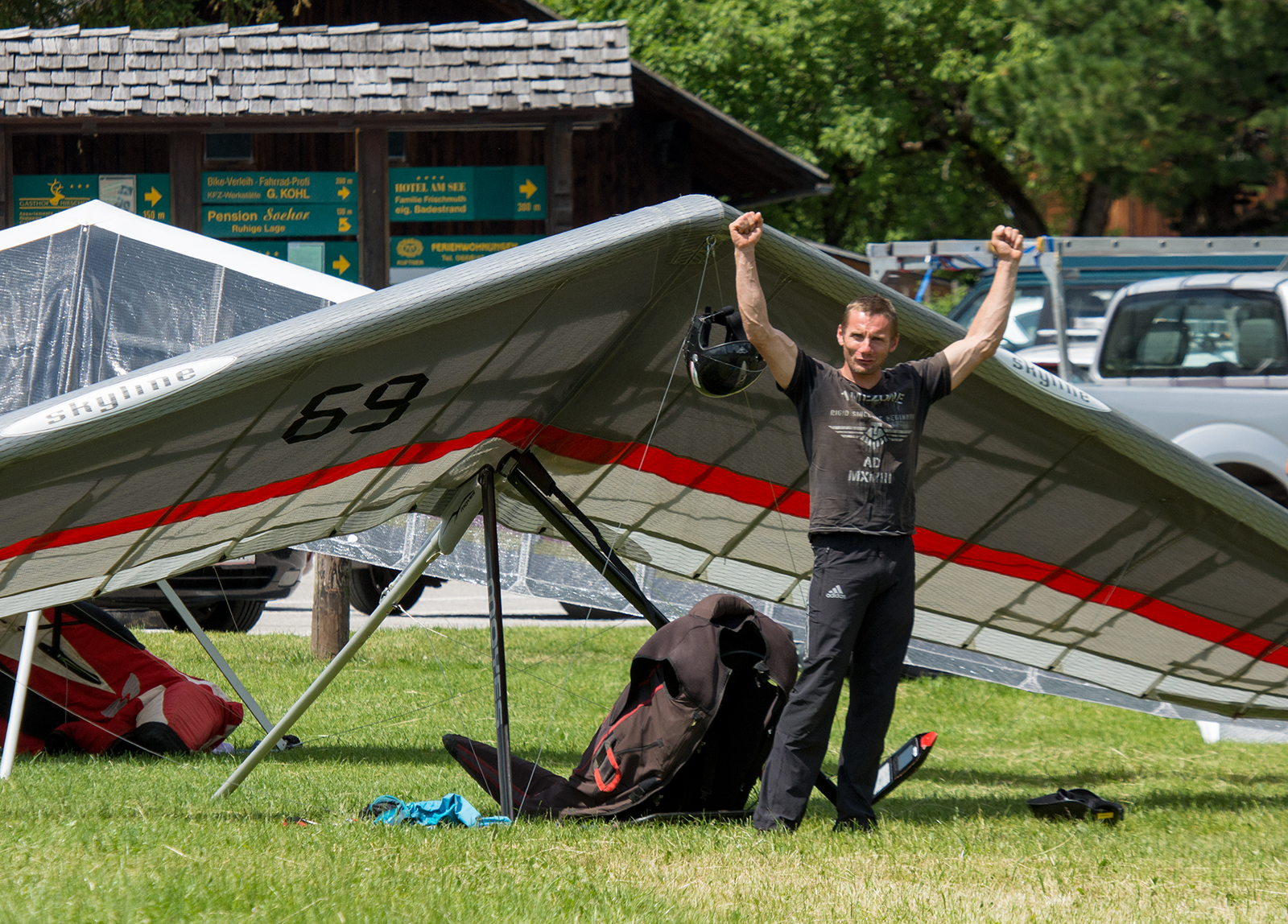 Would be nice to have the list with the results, but unfortunately I didn’t make a picture of it thinking it will be in the internet. Wishful thinking it was. My result was 1st from 3 women (Kathleen and Julia Burlachenko) but overall 15th as Seppi and I unfortunately got only 55 points for the first day after messing up the procedure with starting cylinder (exited instead of entering). But after all this disappointment with the points fades away as the flying part turned out to be so intensive and saturated with very scenic views in the new for me area with 3 goals, one 7 km short of the goal and all this topped by the biggest 180 km triangle for me so far.

Time to prepare for the next flying project 🙂 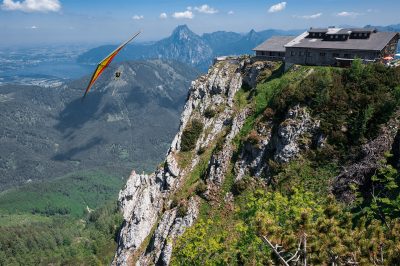 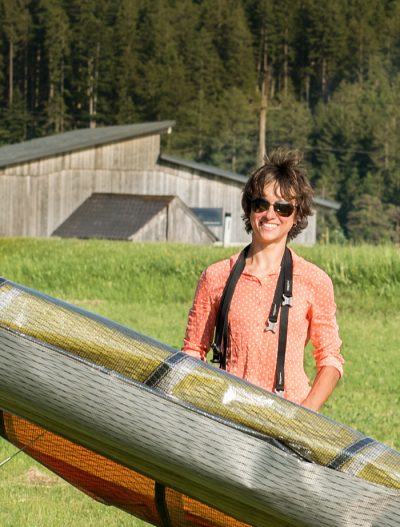 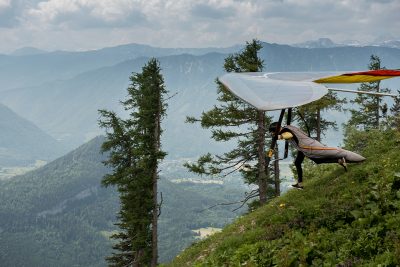 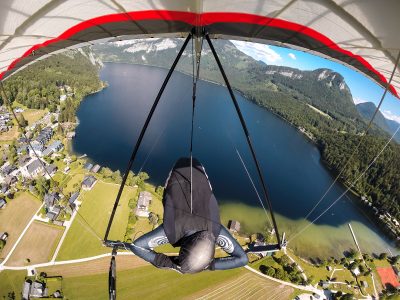 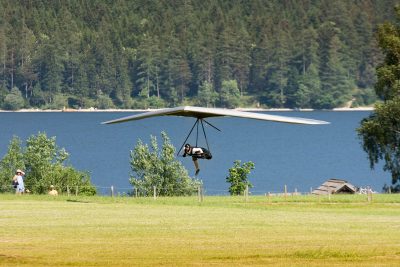 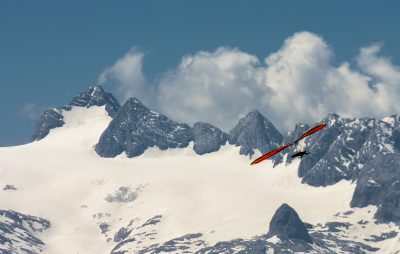 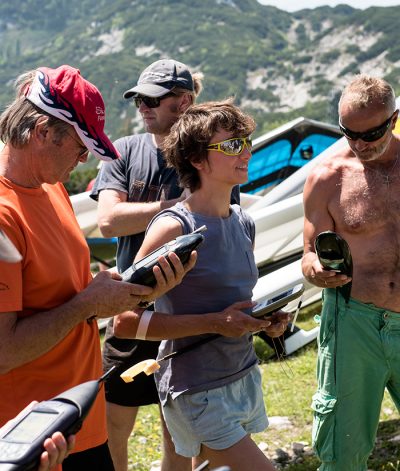 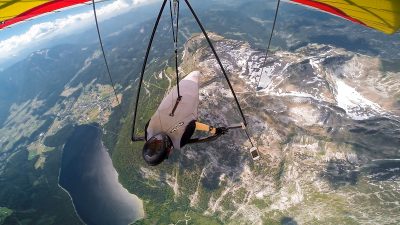 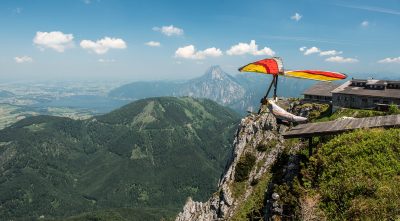 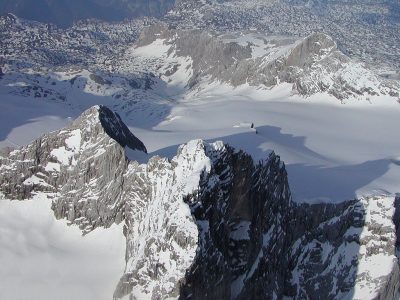 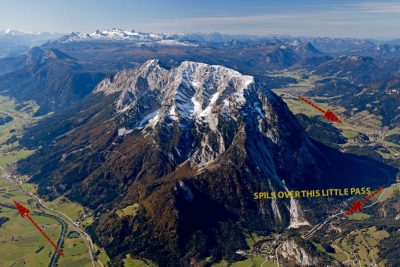 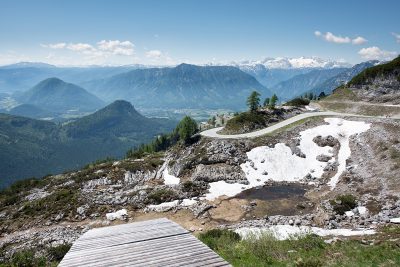