Here is a report about one outstanding flight to Sexten Dolomites, which Gerolf and I did a few days ago.

During the last week we had NW winds in the Alpine region. On the one hand it can be a tricky situation for the places with south exposition. But on n the other hand not too strong northern flow can provide unique conditions allowing to enter the areas which otherwise are hard to fly in.

That was the case for the flight from Kronplatz to Greifenburg. Classical route for that would be going up along Rienz valley towards Toblacher Feld where after a little pass Drau valley begins. Normally the path towards Lienz and then to Greifenburg lays along the northern ridges facing south. Not that I have flown it many times, just partly actually, so for me this kind of XC would be also pretty interesting. But this time we got a better chance to connect Kronplatz to Greifenburg by flying over Sexten Dolomites with the main sweet part presented by famous Tre Cime di Lavaredo (Drei Zinnen) peaks. These three teeth have a great history of ascending attempts and are considered as ones of the most scenic climbing lines in the Alpes. BTW the smallest one is the hardest for the climbers and for us all of them are the same — a few thermals before and after 🙂

Here is how they look like, I am sure most of people will recognize this scenery (got this picture from pustertal.com):

The problem with this area is a lack of landings, so one has to be high enough to jump that deep into this huge limestone plateau. All the efforts are awarded by incredible views. Hard to top the impression of gliding over these mountains, diving in the holes between wisps of dead clouds, making long jump from Tre Cime to Helm ridge. Here is a photo story of the flight.

Take off is always an exciting beginning of the adventure, isn’t it? 🙂 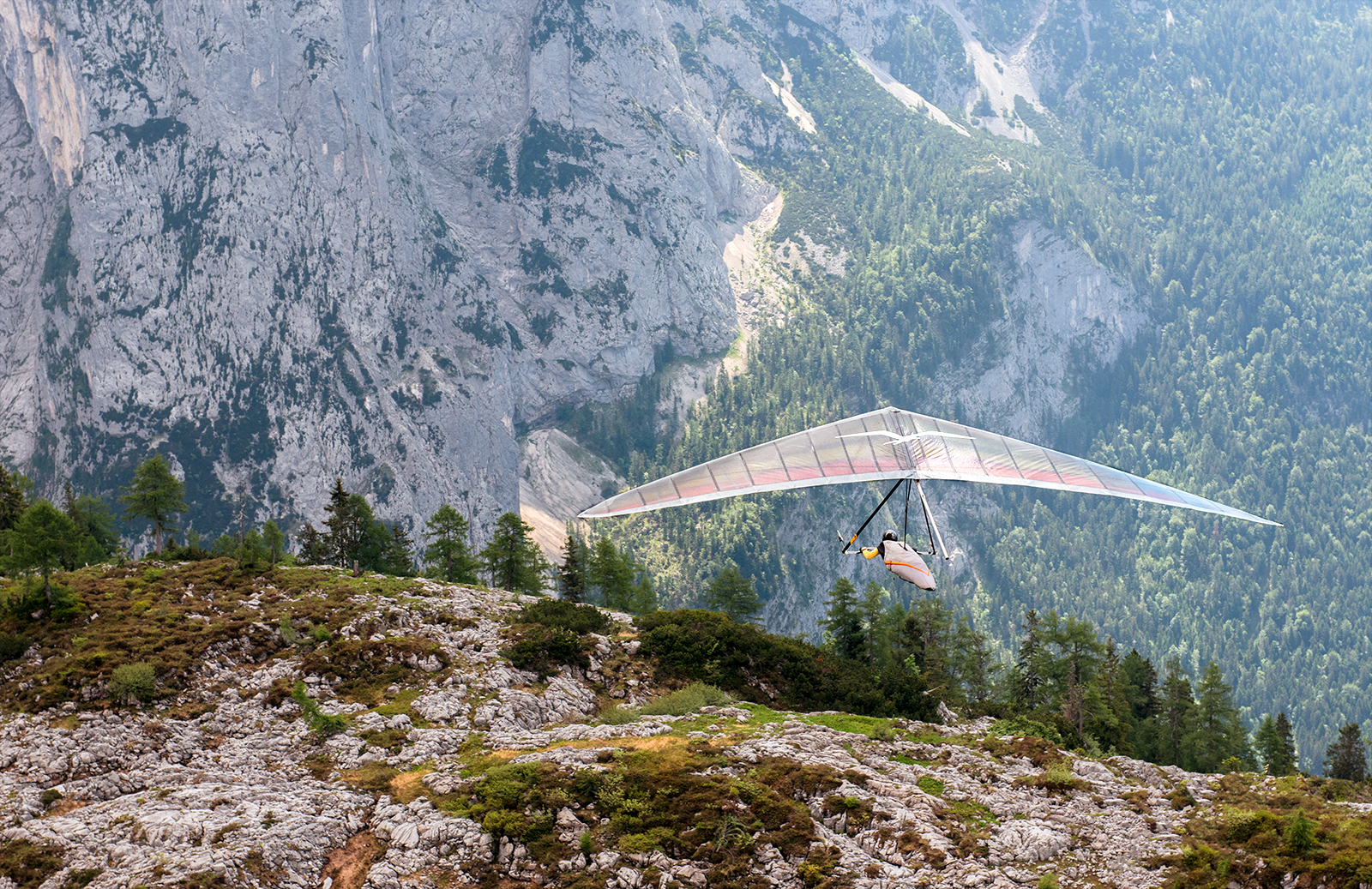 Now we have to turn into the wild area of Sexten Dolomites. Approaching the first important point — Rosskopf massif: 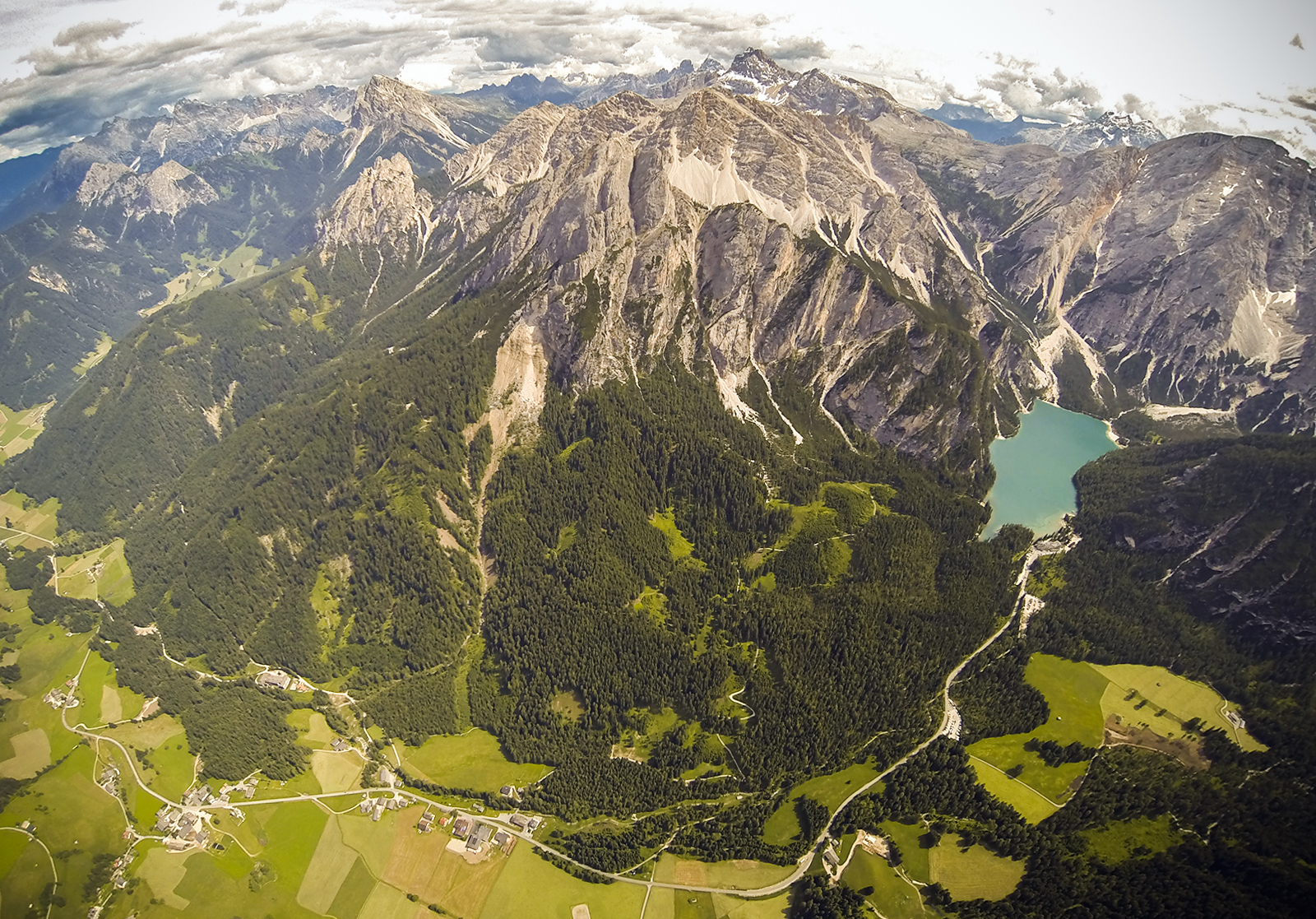 Here is the first part of the route. The north wind allowed us to stay on the south side of the valley and then jump in the Dolomiten part deeper to the south:

I just like yellow and red, they look hot 🙂

But what in reality looks HOT is these rocky posts sticking out of the huge limestone plateau! The cloudbase was 3800 deep there: 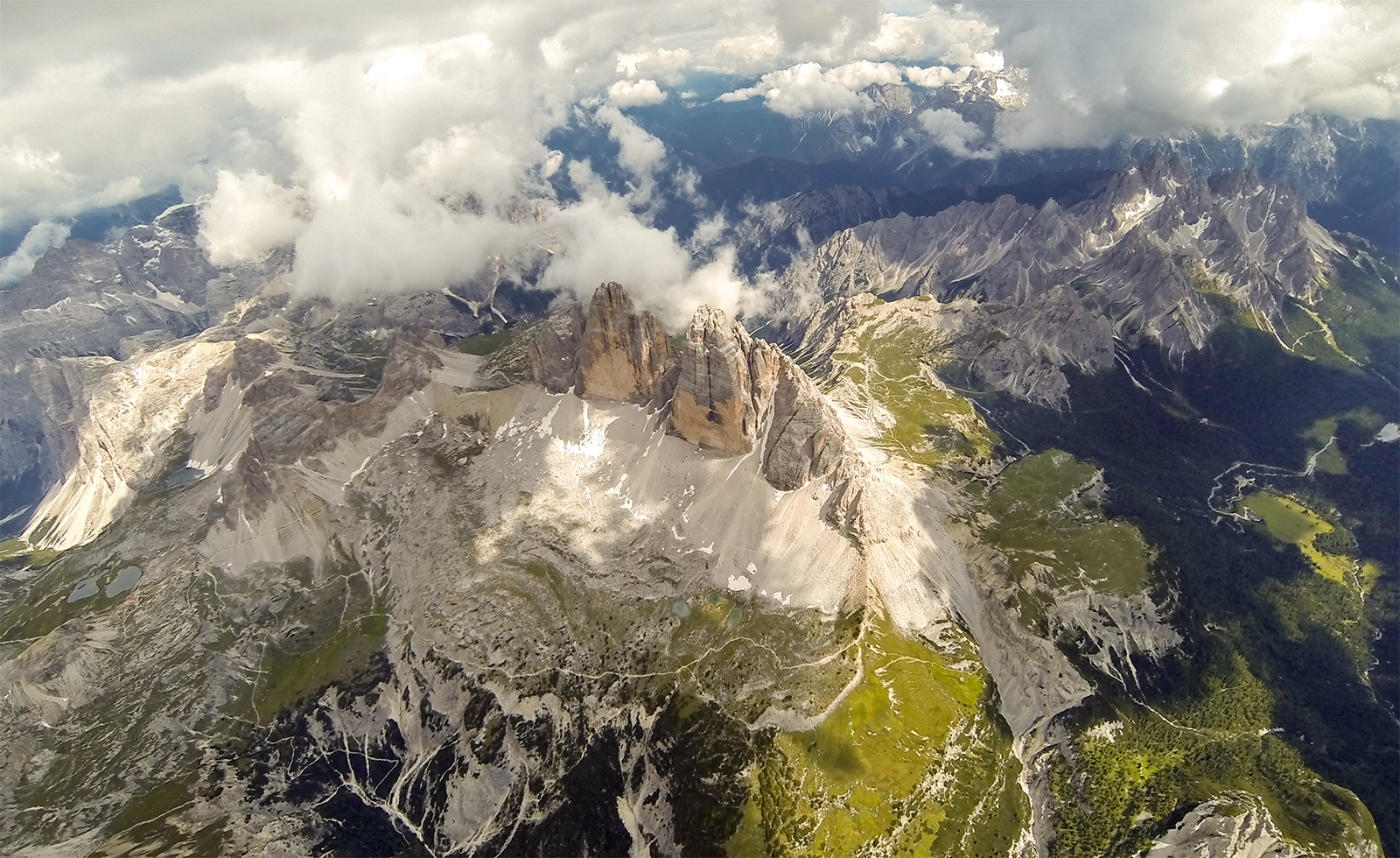 Clouds were something else, this area was a definite split of two air-masses, all the clouds to the south are about 800 m lower than us: 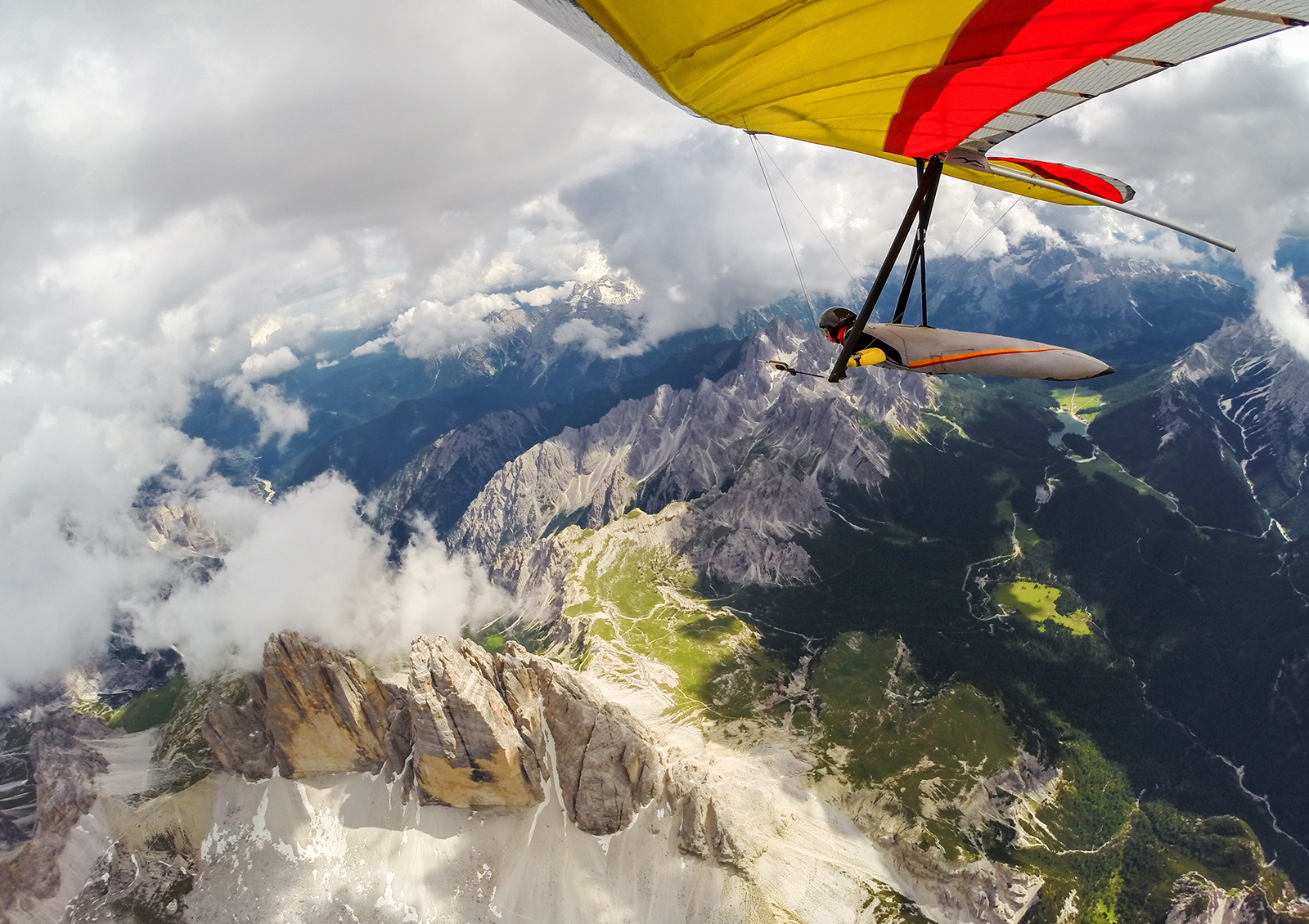 Surfing and scratching the white wisps aiming to Austrian border and Geiltal: 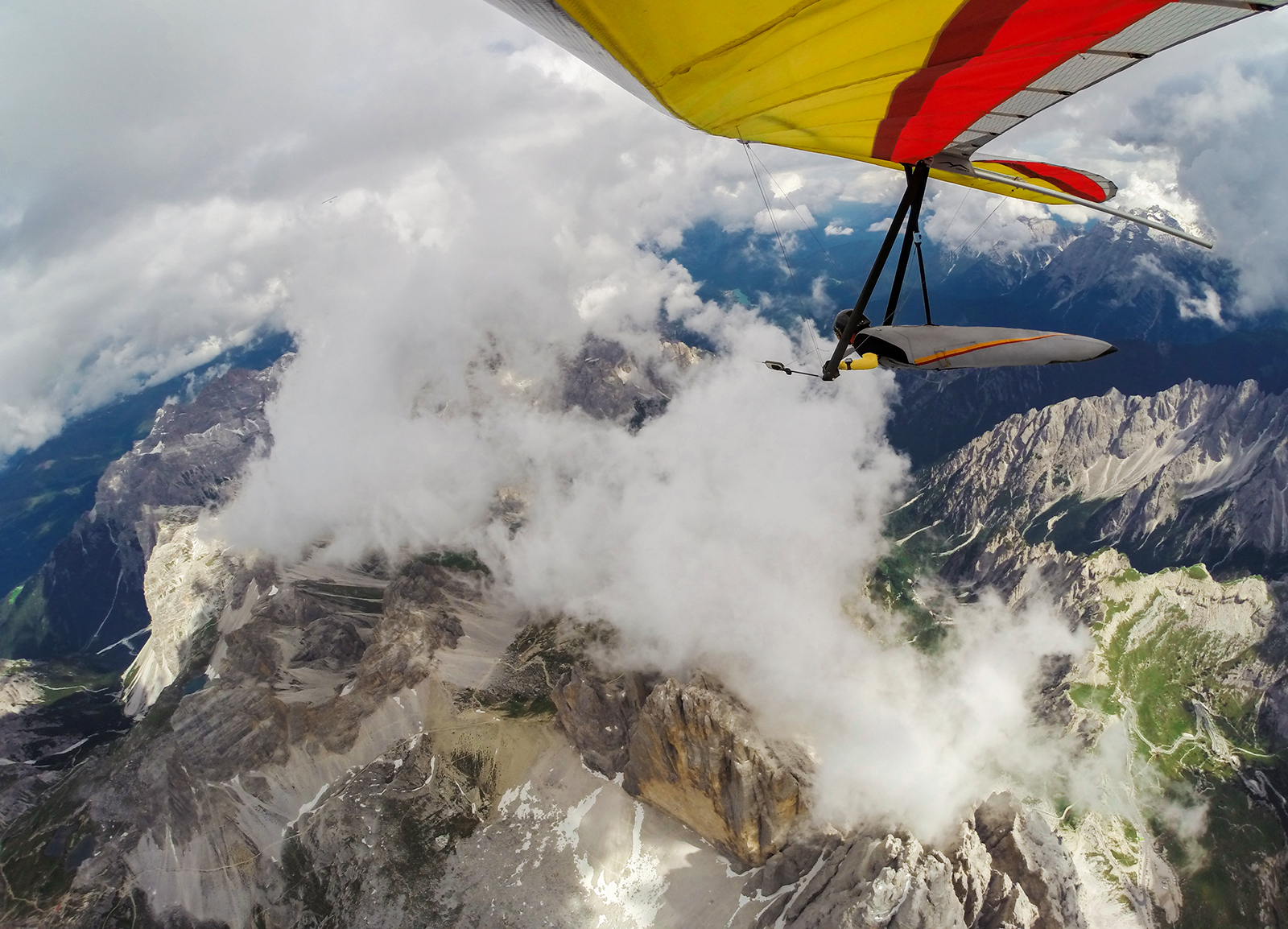 I must say that was very impressive adventure, still cannot get over it 🙂

The second part of the flight was quite tricky. Unfortunately the Lesachtal, Geiltal and Drautal were all fully covered with high clouds. So we got no sun exactly when we were about to cross 15 km piece without landings. Gerolf-the-hero could make it over and squeezed enough altitude to make it almost to the goal, landing just 6 km short. I was not as good, landed on the other side in Geiltal in the middle of unlandable piece 🙂

My track was logged by avionicus livetracking application and can be found here: http://avionicus.ru/track8901/ (here is the igc file if needed).